Today marks an important anniversary for commercial space—and for me. On February 17, 2000 a press conference was held in London to announce that my company, MirCorp, BV, was signing a lease with RKK Energia for the rights to use the Russian space station Mir.

It was an historic milestone in opening outer space to commercial activities. For the first time, a company, not a governmental agency, would operate an orbiting space station. And the year was 2000, not some time in our own future!

Though seventeen years ago, I remember the day very well. The interest from the international press was intimidating. Everything about that day was for me intimidating. I remember walking into the grand hall of the private London business club, the sort where endless oil portraits of business leaders from the past two centuries stared down, and wondering what those barons of British enterprises would think of our efforts to market an aging space station.

We had worked secretly for months to reach this point. With support from our lead investor Walt Anderson, our attorney, Jim Dunstan and myself had made trips back and forth to Moscow to negotiate having a foreign company, in this case Dutch, run an orbiting space station. We had finally agreed with our Russian partners that we would be just like a tenant down here on Earth. MirCorp was responsible for the Mir “to the first coat of paint.” After that, our partners at RKK Energia, and the Russian government, would be responsible for the health of the space station.

I was nervous walking into the press conference for a number of (good) reasons. Firstly, no one had ever done this before. No private company had ever marketed a space station. But secondly, I was fearful of how NASA would react. NASA leadership of the time had trouble understanding that the Russians of the Yeltsin era were far more commercial than we in the States, and that their government had transferred ownership of the Mir space station to RKK Energia. So Energia had every right to enter into a relationship with MirCorp.

As recounted in the book “Realizing Tomorrow, the Path to Private Spaceflight,” from the University of Nebraska Press, our press conference was going well until I explained how part of our business plan was that wealthy, inquisitive people would pay for the chance to take the voyage to the Mir space station. The press burst out laughing. Really! I remember being stunned. How could the reporters not understand the attraction of space exploration?

Well, within several months we had announced that indeed, Dennis Tito was willing to pay for a ticket to the space station. But the reporters in London could not grasp, as could few in our industry, that once unleashed from the government, the space frontier would be attractive to everyday people, no matter the risk, no matter the cost. 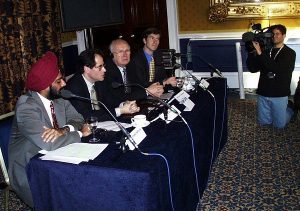 Well, I was right to be worried and at the same time, I was too apprehensive! Yes, the political reaction was difficult. NASA administrator Dan Goldin was angry at the Russians, at Energia and at MirCorp. He could not understand that this was a commercial decision, not a political decision. And it made good sense for everyone. Some in Congress understood, which helped us a great deal.

And the business, well, that turned out pretty well. We had a backlog of close to $200 million by the time the Mir came to its end. And I was able to show that a private company could market a space station in ways that a governmental space agency just couldn’t.

So February 17th, 2000 marks the official beginning of MirCorp taking control of the Mir space station. It also, in many ways, marks the beginning of the commercial era that we found ourselves in today.

The press conference was our public ‘coming out” as two weeks earlier, the Russian government had agreed with Energia’s agreement with MirCorp and a Russian Progress had blasted off to the station not to de-orbit the Mir but to push it into a higher orbit. But few knew the details, and that’s what we provided at the press conference. How MirCorp was owned 38% by the Russian company Energia, how the rest belonged to western investors and how we believed that a private space station could attract paying customers in research and media.

It turned out to be a life-changing experience, and one that clearly has allowed me build up our customer base and make NanoRacks in 2017 the go-to company for commercial services on the International Space Station. I learned a lot from the roller coaster ride that was the time I spent at the helm of MirCorp.

Given that we are, seventeen years later, on a true cusp of commercial operations in low-earth orbit, I’ve decided this is the year to mark the milestones of the MirCorp journey. I’ll be writing blogs on the critical anniversaries, and explaining the lessons learned and how I’ve been applying that to the International Space Station. And soon enough, I hope to be applying these same lessons to our own, privately owned space station(s)!