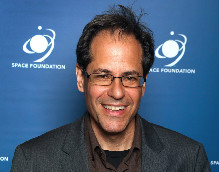 Jeffrey Manber is one of the better unknown communicators of our time. His books and numerous articles and past blogs offer wry commentary on who we are, as seen through our heroes and idols. His op-ed pieces have been published on platforms ranging from the New York Times to the Bangor Daily News.

His initial, and successful foray, into publishing was as the 21-year old publisher of first The Movie Goer and later At the Movies, which was the first freely distributed magazine for movie patrons in Manhattan. He later served as the editor of several ground-breaking publications, including Gadget and Computer Living, before jumping into the business of space exploration.

Jeff is recognized today as one of the pioneers into making outer space just another place to live, to work and do business. He is the only businessman to have marketed services on two space stations and commercially sent a crew of two humans to the Mir space station (MirCorp-1).

Cited by NASA and industry organizations for his accomplishments, he is currently seeking the means to develop yet another space station, this one completely operated by a private company.